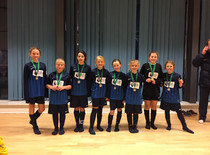 The Year 6 Girls from Snaith School delivered an outstanding performance to be runners up in tho tournament held at South Hunsley School. 11 teams were competing and there were some tough match ups on the night. Mia Denton and Olivia Hargreaves (Snaith School - Yr 6) provided this report.

A huge well done to the Snaith Primary girls’ football team, who had an amazing victory coming in second place out of eleven teams.

During the tournament there were some tough games but with a lot of hard work they managed to conquer them. Aleisha, who was their team captain, led their team to victory as well as their goal-keeper Caitlin – who did an outstanding job!

After the match, we had a quote from Olivia, one of their three attackers, “WE CRUSHED THEM! I don’t think our team could have played any better.”

Also we had a quote from Mia, one of the three defenders, “We smashed it! The experience was amazing!”

Overall the Snaith Primary girls’ football team did extremely well; we look forward to seeing them next time!