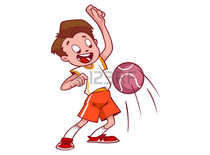 Our Cluster Primary Schools participated in our Dodgeball Tournament hosted by Cottingham High School on Tuesday the 12th of November 2019. The event consisted of seven teams from four schools playing games against each other from Year 3/4. Teams consisted of mixed squads with some schools entering more than one team.  All competitors played with great effort and enthusiasm and the atmosphere in our sports hall was exciting.

The winners this year are Westfield who played against a strong Croxby team in the final. We congratulate both teams as they have qualified for the next round to be played at Wolfreton School.

I would like to thank and acknowledge our Year 8 Sports Leaders (Neve Hammond, Evie Burnett and Charleigh Lee) from Cottingham High School who helped officiate the event this year and all teachers, staff and parents supporting their teams making the competition possible.