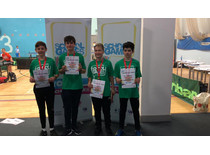 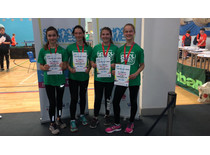 In an all North Lincolnshire semi-final, Kirmington St Helenas beat Luddington and Garthorpe comfortably with a similar win for Hilderthorpe in an all East Riding match against Snaith. In a dramatic final between Hilderthorpe and Kirmington St Helenas the game ended 4-4. The East Riding team took the title 9-8 on game countback. Luddington and Garthorpe were third, Snaith fourth, Bricknell fifth and William Barcroft in sixth.

In the Under 11 boys competition, Victoria Dock (Hull) remained unbeaten to win Group A with Wybers Wood B (North East Lincolnshire) in second, Kirmington St Helenas in third and Snaith in fourth. In Group B, Wybers Wood A took the group after a 5-3 victory over St Anthony’s (Hull) who were runners up with Luddington and Garthorpe in third and Burlington Juniors (East Riding) in sixth place.

In the an all Hull semi-final, Victoria Dock won 5-3 in a close contest with St Anthony’s and Wybers Wood A beat their “B” team to reach the final. The final was dramatic as Victoria Dock levelled the match 4-4 in the final game against Wybers Wood A. Game countback could still not split the teams with a 10-10 scoreline. However, the North East Lincolnshire team prevailed with a 176-166 points victory. St Anthony’s beat Wybers Wood B on 10-8 on game countback to claim third place. Kirmington St Helenas were fifth, Luddington and Garthorpe sixth with Snaith and Burlington Juniors finishing in seventh and eight respectively.